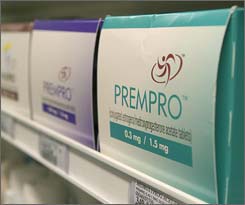 By The Associated Press Posted November 23, 2009 Â  A Philadelphia jury has ordered Wyeth Pharmaceuticals to pay a woman $75 million in punitive damages after finding a link between her breast cancer and a hormone-replacement drug. Â  Â The punitive damages in the case of Connie Barton were unsealed yesterday, the same day of a verdict in the case of Donna Kendall, who was awarded $6.3 million in compensatory damages and $28 million in punitive damages, said Esther Berezofsky, an attorney for Barton. Â Â  Last month, the jury awarded Barton $3.75 million in compensatory damages and found Wyeth willfully hid evidence of a cancer link. Â  Â The punitive award for Barton, of Peoria, Ill., had been sealed until yesterday because Kendall’s case was being heard in the same courthouse. A handful of Prempro lawsuits have gone to trial out of several thousand filed across the country. Â Â  Wyeth, based in Madison, was acquired by New York drugmaker Pfizer Inc. for $68 billion last month. A spokesman for Pfizer said the company will challenge both verdicts. Â Â  “We are disappointed with the verdicts in these cases,” Pfizer spokesman Chris Loder said in a statement. Â Â  “The company believes that neither the awards of punitive damages nor the liability verdicts were supported by the evidence or the law.” Â Â  Barton, 64, a retired hospital records clerk from Peoria, took Prempro for five years before her 2002 cancer diagnosis. Â Â  Wyeth, in court arguments, told jurors that women are now fully informed of the risks and benefits of Prempro, a combination estrogen-progestin pill. Â Â  Kendall, 66, of Decatur, Ill., took combination estrogen-progestin therapy from 1991 to 2002, including the last four years on Prempro, and was diagnosed with breast cancer in 2002, said her attorney, Tobi Millrood. Â Â  In her case, Wyeth was ordered to pay $16 million of the punitive damages and Upjohn Co., which is now a division of Pfizer, was ordered to pay $12 million, Millrood said. Â Â  “Today’s verdict is a resounding victory not only for Donna Kendall but for women around the country,” Millrood said. Â Â  Sales of Prempro have plummeted since 2002 when a large federal health study, the Women’s Health Initiative, was stopped when researchers saw more breast cancers in those on Prempro. Â Â  A study this year shows that lung cancer seems more likely to prove fatal in women who are taking the combination drug.