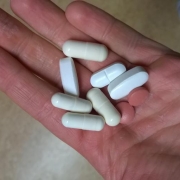 The trouble with Johnson & Johnson’s talc baby powder was not the last of their legal woes. Janssen Pharmaceuticals, a subsidiary of Johnson & Johnson, is now adding to the legal battles. One particular medication, Elmiron, has presented itself as the newest offender in a promised cure, manifesting into unexpected and unmarked complications.

Elmiron (pentosan polysulfate sodium) is a drug used to treat bladder pain. Generally, the discomfort is caused by interstitial cystitis (IC), which is inflammation of the bladder. The condition is often chronic, and there are no known cures. Medications and therapies have proven to be an effective method of controlling pain and improving the quality of life.

One popular method of treating IC is the use of Elmiron. There is no generic medication for Elmiron, which is unfortunate as it is quite expensive. Luckily, 97% of insurances cover the brand, dropping prices from around $870 to $40-$70 for users.

Although it is unknown exactly how Elmiron helps with IC, it is believed the medication either restores the bladder’s surface or coats it, decreasing the chances of irritation to the bladder wall. This outcome is not instantaneous, often taking two to four months to reduce pain and up to six before urination frequency is decreased.

Why is Elmiron prescribed?

According to Elmiron’s website, “ELMIRON® is the only oral medication that’s FDA approved to treat the bladder pain or discomfort associated with IC.” IC symptoms are often different per individual, as well as change over time. Certain events can also trigger the symptoms, such as menstruation, sitting for an extended period, stress, exercise, and sexual activity. Symptoms can frequently mimic urinary tract infections; however, there is not generally an infection with IC.

Per Elmiron’s website, the long-term use of Elmiron may cause pigment changes in the retina. Although the why behind the retina changes are unclear, the website acknowledges the continued use of Elmiron “may be a risk factor.”

Reported visual disturbances include difficulty reading, blurred vision, and difficulty adjusting to low lighting. The company advises anyone noticing new vision disturbances to contact their doctor. Further, they suggest that during Elmiron’s use, regular eye appointments with retinal exams should be maintained.

In March 2020, Teva Pharmaceuticals and Johnson & Johnson were delivered a lawsuit by Kimberly Pelczar. In the case, she claimed ten years after starting Elmiron she began to seek medical help for her vision. In 2019 she was told she had a permanent retinal injury. Pelczar claimed the drugmakers did not warn doctors about the vision risks and, in fact, concealed the information from the public.

Just two months later, in May 2020, Tina Pisco filed a lawsuit against Elmiron. Pisco stated the drug caused a degenerative disease in her eyes called maculopathy. Within six years of starting the drug, her eyesight quickly deteriorated. The retinal injury in both her eyes was permanent.

Pisco pressed charges against Janssen Pharmaceuticals. Per Pisco, despite being on the market since 1996 and having knowledge of adverse reactions, Janssen did not disclose the potential for severe and permanent visual damage to users. The case makes note of the fact that in 2019, Canada required Janssen to update Elmiron’s label. The new label read, “Post-market cases of pigmentary maculopathy have been reported with chronic use of pentosan polysulfate sodium (PPS). Visual symptoms in these cases included difficulty reading and prolonged dark adaptation. All patients should have regular ophthalmic examinations for early detection of pigmentary maculopathy, particularly those with long-term use of PPS.” The US did not follow suit.

In August, Clara Johns and Shirley Ruth Levy filed lawsuits against Elmiron. The women claimed the drug manufacturers Johnson & Johnson and Bayer and Teva knew Elmiron caused harm, but withheld information of the consequences of long-term use. Per the lawsuit, physicians and patients were not advised of potential retinal damage or of potential blurred or distorted vision. Johns used the drug for ten years, whereas Levy only used the drug for four years.

Studies of Elmiron and retinal damage

In 2018, Nieraj Jain, MD, of Emory Eye Center in Atlanta, Georgia, discovered six of his patients who had taken Elmiron for 15 years had damage in their macula. The macula is responsible for clear vision and is in the central part of the retina. There was nothing else in the patients’ histories that could explain the changes, and thus, Dr. Jain and colleagues raised concern with Elmiron.

Three ophthalmologists at Kaiser Permanente heard this warning and opted to explore further.  Robin A. Vora, M.D , Amar P. Patel, MD, and Ronald Melles MD found one patient that raised a red flag and responded to the discovery by investigating Kaiser’s 4.3 million patients. Their deep-dive revealed 140 patients who, over the course of 15 years, had taken an average of 5,000 pills of Elmiron. Of these patients, 91 agreed to be examined for the research.

From here, the doctors discovered 22 of 91 with signs of drug toxicity. When patients increased the amount of the drug, the rate of toxicity increased. For example, when taking 500 to 1,000 grams of Elmiron, 11% showed drug toxicity. However, when that amount increased to 1500 grams, 42% showed toxicity.

On June 16th, 2020, Janssen Pharmaceuticals added a “black box warning” on Elmiron’s US product. This warning type is the FDA’s most rigorous warning used to notify users of severe side effects such as injury or death. The updated label now lists “retinal pigmentary changes” under the “warnings” section. Canada required this warning in October 2019, and the European Medicines Agency pushed for the same notice in June of 2019.

The question remains, as posed when the Kaiser study was released, is, did Elmiron cause the maculopathy or decreased vision capabilities, or are these symptoms bi-products of interstitial cystitis itself? Either way, the attorneys fighting the current cases seem to believe Janssen Pharmaceuticals knew there could be an issue and did not inform the public.

In the center of your eye is the macula, which is responsible for accurate vision. This area is sensitive. One of many disorders to the macula is maculopathy, which is essentially macular degeneration. This disorder causes loss of central vision in one or both eyes. Because the eyes can compensate for vision loss, if the damage is in only one eye, a person may not notice the progression of damage until it affects both eyes.

There are many types of macular degenerations, but the one related to IC is pigmentary maculopathy. The damage done to the retina and vision due to IC drugs is irreversible. The medical experts recommend anyone who has used Elmiron to have an ophthalmic examination for early detection of maculopathy.

Symptoms of maculopathy include:

What to do if you believe Elmiron injured you

At The Hayes Firm, we believe you deserve to have information available to you regarding the risks of the medication you are taking. If you have experienced decreased or total vision loss and have taken Elmiron, let us help. We will direct you to and if necessary co-counsel with law firms experienced in fighting the drug companies who have failed their patients.

Whether you are looking to recover losses from medical expenses, living aids, loss of enjoyment, or punitive damages against Janssen Pharmaceuticals, we can help you.

Current injuries in Elmiron lawsuits include:

Contact The Hayes Firm today. Not only will we fight for you, but we will stay on top of the newest information available and other cases against Elmiron. We are ready to stand beside you against drug companies that let doctors and patients take an unnecessarily uninformed risk.